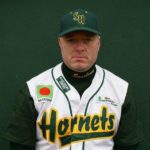 As a player, Beitler played three seasons of collegiate summer league baseball in the Detroit, MI, area with two seasons in the Detroit Adray League and one in the Livonia Collegiate League. Beitler also competed for the Windsor Titans who played in the Little Caesars Connie Mack League in Southeast Michigan, and spent a season with the Tecumseh Green Giants Baseball Club.

At University, Beitler played football for the Windsor Lancers. On the gridiron, Beitler was a linebacker for the Blue and Gold, and his enthusiasm and intensity for sports has transcended into his baseball coaching style.

Off the field, coach Beitler is on the board of directors of The Care for Kidneys Foundation which is a Windsor, Ontario-based non-profit charitable organization established in 2012. The foundation is dedicated to improving the health and quality of life of patients living with kidney disease and of those at risk of developing kidney disease.

Keaton Briscoe was a UBC Thunderbird from 2010 to 2012. Briscoe made an immediate impact in the Thunderbird lineup starting 98 of the 101 games that he appeared in during that time. Briscoe ended his UBC career with 352 At Bats, 113 hits, 4 home runs, 52 RBI’s, and 26 stolen bases and a .321 batting average.

The North Vancouver native was then drafted by the Boston Red Sox in the 27th round of the 2012 first year player draft. Briscoe spent time with the rookie league team in the Gulf Coast League and then spent a season with Greenville in the South Atlantic League. After an injury riddled 2013 season, Briscoe signed his voluntary retirement papers in 2014 after slow healing stress fractures in his legs.

Briscoe has completed his degree at UBC. Currently coach Briscoe resides in North Vancouver, BC.

Devery Van De Keere joins Last Raps Baseball with a strong coaching background. In 2017 Van De Keere managed the Cologne Cardinals in the German Bundesliga, after spending seven seasons as a player-coach with the Dornbirn Indians in the Austrian baseball league. In the fall of 2017, Van De Keere managed the U19 European team that is played a tour of exhibition games in Japan. Also during his time in Europe, Van De Keere was an envoy coach representing Major League Baseball International in 2014 and 2015 where he worked with the four baseball academies in France and with several teams in the Czech Republic. From 2012 to 2016 Van De Keere also was an assistant coach for Austria’s U15 National Team.

The Barhead, Alberta native is employed on a full time basis with Last Raps Baseball.

Andrew Firth donned the UBC Thunderbird uniform from 2010 to 2013. Known for his sure hands and clutch hitting, Andrew anchored the hot corner for the Thunderbirds during much of his career. Firth’s career stat line included starting 166 of the 177 games that he appeared, 659 At Bats, 227 hits, 8 home runs, 131 RBI’s, and 6 stolen bases and a .344 batting average.

The London, ON, native was the 2013 recipient of the Bobby Gaul Memorial Trophy as UBC’s graduating male athlete of the year.

Firth is currently wrapping up his degree and preparing to write his medical school entrance exams. Andrew occasionally works clinics with Last Raps Baseball Corp. but will be leading the summer camp programming in Vancouver in 2014.

Sebastian Wong was a five year UBC Thunderbird from 2010 to 2014. Wong’s even keeled demeanor, professional work ethic, and leadership helped steady a young Thunderbird squad in 2014 as he was one of the captains of the squad. Wong’s career stat line included starting 101 of the 151 games that he appeared, 420 At Bats, 114 hits, 0 home runs, 57 RBI’s, and 9 stolen bases and a .271 batting average.

The Abbotsford, BC, native is finishing up his degree in mathematics. Wong will be coaching in the local Vancouver area camps this summer.

The Ladysmith, BC, native is currently playing in his second season for the Trois-Rivieres Aigles of the American Association of Independent Baseball.

Since the completion of his degree, Britton-Foster is currently working on becoming a paramedic.

Matt Spillman arrived at UBC in 2011 after spending his freshman year at Walsh University in Ohio. Making a seamless adjustment to the Thunderbird program, Spillman settled in and was regularly found at the top of the Thunderbird batting order. In 2012, Spillman’s season was cut short after undergoing Tommy John surgery, which replaced a ligament in his throwing elbow. Spillman’s career stat line included starting all 119 games that he appeared, 390 At Bats, 107 hits, 3 home runs, 49 RBI’s, and 10 stolen bases and a .274 batting average.

The Wellend, ON, native recently wrapped up his degree at UBC with a focus in accounting. Spillman is currently playing for the Swift Current Indians in the Western Major Baseball League.